If you thought that camouflage patterns and earthy colours are the only inheritance the armed forces have gifted the world of fashion, think again. In contrast to the olive and khaki of the military, the naval forces inspired us with hues of white, red and blues. Breton Stripes, now a sartorial staple, began its journey as a seafarers clothing in the French Navy. Nautical clothing has been adopted in fashion both – as a symbol of national pride and as a symbol of solidarity. Over the years, nautical fashion has gone from being exclusive to sailors to beachwear to an elevated, everyday style that is chic and effortless.

The Mufti nautical polo shirt collection sits at the intersection of dressed urban wear and casual athleisure with borrowed design cues and fits from the best of both worlds. It’s young – slip into one and you will immediately knock off a decade or two in appearance than when you are wearing that monogrammed solid polo tee. 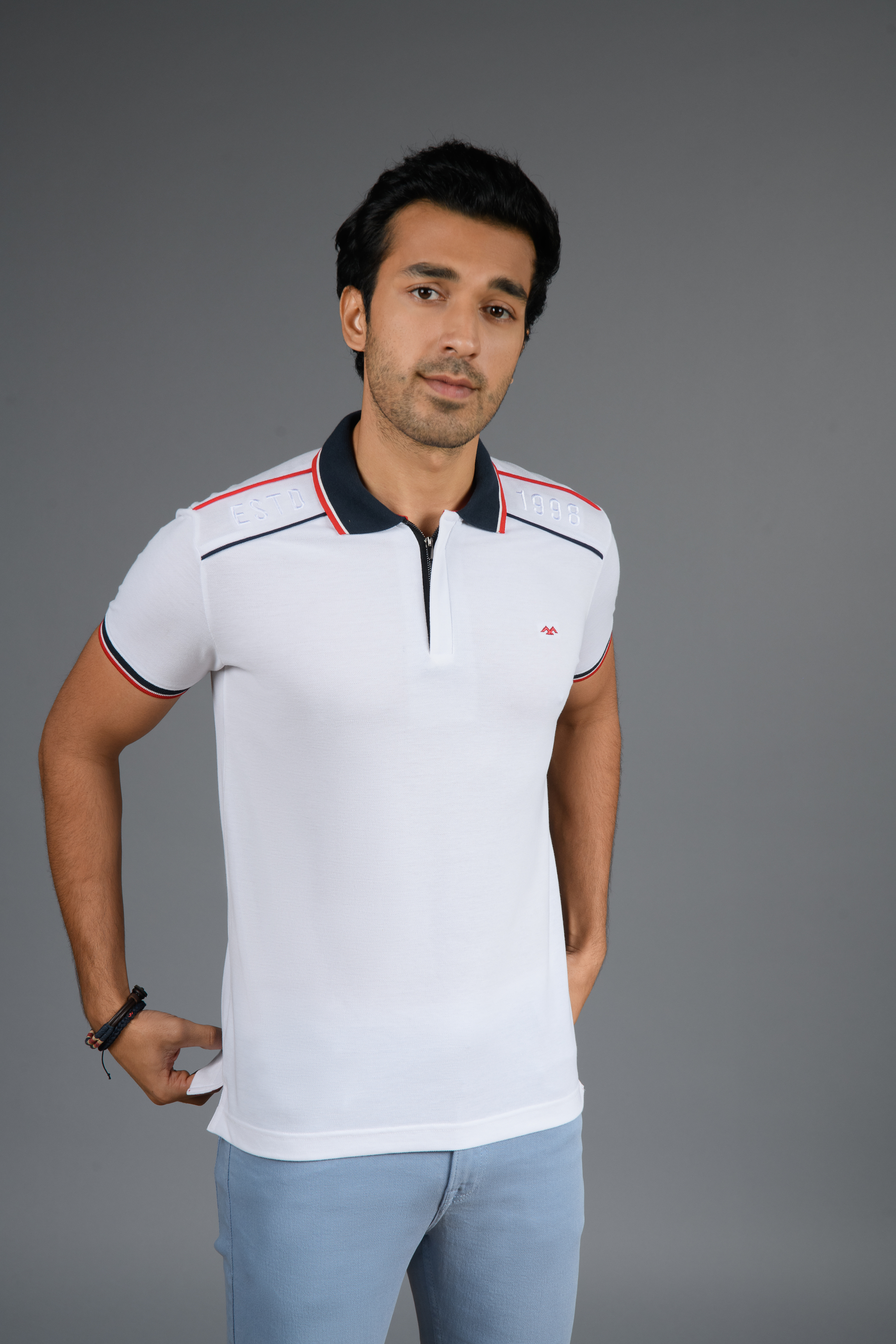 Take for example this urban polo shirt in question – instead of the traditional exclusive solid colour, the Mufti polo features a bold contrast collar and a contrast detailing on the sleeve. Replacing the seen-it-a-million-times buttoned placket is a zippered closing that adds that touch of casual detailing you really need in a good polo tee. What really sets this polo shirt apart from any other though, is our signature branding embroidered across the length of the shoulder enclosed in a contrast pipping detail. It’s discreet from a distance and yet will immediately stand out when someone is close – a hallmark of detailing done right.

The best way to wear the all-over-print Mufti urban nautical polo shirts is to simply not overthink it – it goes so well with everything! This polo shirt can be as stylish as a button-up or as casual as a tee — it’s just a matter of how you wear it. For a busy day at work, we recommend pairing this polo shirt with a pair of neatly pressed chinos and accessorised with a trademark watch. Looking to ease into the weekend? Slip into a pair of light wash denim and put on your best sneakers. On particularly hot and humid days, we recommend you switch to shorts, even sweatshirts, depending on if you are eyeing that on-the-boat feel from the French Riviera or a beach-bum vibe from Goa. Just, whatever you do, make sure that your polo is well-fitted (baggy polos are a strict no-no) and always, always leave the collar of your polo shirt down.

With so much navy-inspired heritage to pull from, we at the Mufti endeavoured to create a casual shirt that breaks away from the old conventions and yet is styled as a full nautical tribute. Traditionally limited to solids and horizontal stripes, we adapted the Mufti nautical casual shirt to feature unique, uneven vertical stripes that highlight an alluring contrast of the nautical brights. With the entire gamut of quintessential nautical colours, this casual striped shirt for men is probably the easiest nautical fashion element to add to your summer wardrobe.  The lightweight, breathable fabric of this casual shirt for men allows the Mufti Man to stay breezy even when not at sea.

All serve as a reminder that come summer, you can never go wrong by going a little nautical. The timeless heritage of this sailor-inspired clothing immediately adds a level of respectability and style to your everyday look.